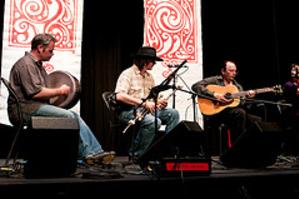 It's great when a tune or piece that I write is recorded or played in a show. Gives me a great sense of accomplishment. Not many people know that I write music as well as play it.

I play mostly Bodhran and Banjo. Also proficient on numerous of other types of percussion. Singing is also in my wheelhouse as well as playing octave mandolin.

Jackie’s talents have also led him to appear on stage with “Riverdance,” and to help form and perform with the Trinity Irish Dance Company.  And when Hollywood needs a musician to play the part, and look it as well, you’ll see Jackie. “Backdraft” (1991), “Blink” (1993), “Traveler” (1997) and “The Road to Perdition” (2002) all saw fit to feature Jackie and his Bodhrán.

Proficient on a wide variety of percussion instruments, including the Bodhrán.  Plays 4 string tenor banjo and Mandocello.  Sings and composes music.

Born in Tipperary, ten-year-old Jackie and his family immigrated to Chicago where he quickly began drumming with the best players in the Irish music scene.  The young boy became the man who is preeminent in Chicago Irish music.  No less than famed fiddler, Liz Carroll says that’s true.

“I just think he's the best of the best in our area of the country - and all over. I don't want to give him a swelled head but he's a really terrific drummer.”

Most recently, Jackie has started a new band. 'The Humours' alongside Isaac Alderson, Jesse Langen, and Ryan McKasson.